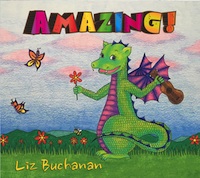 Don’t miss Amazing! Liz’s fourth album delivers fun songs about stories, science and nature. Liz wrote many of the songs with children, inspired by favorite books such as The Very Hungry Caterpillar by Eric Carle and The Dot by Peter H. Reynolds. You’ll love the terrific rocker about T-Rex and Liz’s musical retelling of the Tortoise and the Hare. This CD also celebrates children’s creativity with songs such as “Amazing” and “Imagination.” This is a great album for listening, singing and dancing, and can also accompany classroom activities and library story hours!

To order, contact Liz directly, or purchase downloads from Songsforteaching.com.

When I got to song #11, “Winter Song,” on Liz Buchanan’s splendid album, “Amazing,“ it hit me what the thread was that runs through this uplifting, very fun recording: “Inside my heart, there’s a whole lot of love, and it’s going to keep us warm for a while.” Oh, you’re in for a treat! These dozen original songs are melodic and hopeful and surprising. Liz’s voice is right on the money, the musicianship is excellent, and the production is terrific. (Kudos to co-producers Eric Kilburn and Liz.) This album is SO GOOD for kids. Life lessons unfold in story form—always aspirational, never didactic. I’m singing several of the songs in my head as I write this. Liz opens the door to children’s innate power of imagination, creativity, and optimism in the most wonderful ways.

… Among the standouts are “No Fire, Dragon!” (which promotes playing nicely together) and “H2O” (a folksy call-and-response song about water). Buchanan’s pleasing voice blends well with [Gordon] MacFarland’s harmonies on “Winter Song.” … Verdict: Fans of Laurie Berkner will like this one. 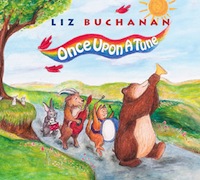 “Once Upon A Tune”

Liz Buchanan’s 2013 CD, “Once Upon a Tune,” offers a delightful take on classic children’s tales, including a trio of original songs about The Three Bears, Three Billy Goats Gruff and Three Little Kittens, a shout-back to Liz’s previous CD, with its bluesy rendition of Three Little Pigs. Fans of Liz’s classroom sessions in Boston will be thrilled that she has finally recorded her popular pair of rabbit songs: “Peter Rabbit,” and “Rockin’ in the Rabbit Hole,” a tune by “Guitar Bob” Messano. This award-winning album also features Liz’s enticing story-song about color mixing, “What Color Will You Be?” and closes with a pair of songs geared for emerging readers, a blues recitation of vowels and a consonant hoedown!

To order contact Liz directly, or purchase from Songsforteaching.com.

“In this follow-up to her 2010 album, Singing All the Way Home, Buchanan again provides children and their parents with a collection of songs that are enjoyable to listen to and easy to sing along with … This versatile collection could easily be used during language arts lessons or story times or for family listening.”
-Veronica De Fazio, Plainfield Public Library District, IL, in School Library Journal

JOYFUL music!!! My 2½-year old grandaughter and I love it and enjoy it over and over again. Many thanks to Liz Buchanan!!! 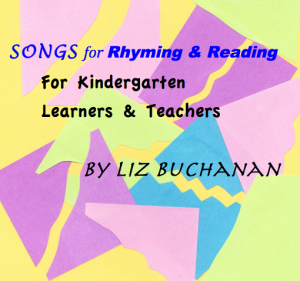 “Songs for Rhyming and Reading”

Liz’s songs are great for literacy learning! This collection of original songs for rhyming, word families, segmenting words and clapping syllables is available exclusively from Songs for Teaching. 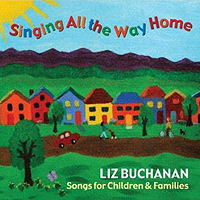 “Singing All the Way Home” is Liz Buchanan’s second collection of wonderful tunes, mostly original, and many highlighting the theme of Home. The album opens with a multicultural “Hello” and then puts a sparkling new twist on the traditional “This Little Piggy” rhyme. What follows is a rollicking line-up of songs in a variety of styles, from sweet folk melodies to old-fashioned rock and roll. Liz also includes songs that help build important early literacy skills such as rhyming, alliteration, clapping syllables, opposites, sequence and narrative. These songs are easily adaptable for the classroom and learning at home. A special favorite is the “Three Little Pigs” song, which can be acted out or done as a finger play or puppet show. You won’t want to miss that bluesy Big Bad Wolf, accompanied by a wailing harmonica! At long last, Liz has also recorded another classroom favorite, “If I Were a Butterfly,” which is fun for fluttering about and cuddling up in the shape of a chrysalis.

“Singing All the Way Home” has won three prestigious awards:

This is a wonderful CD! My 5-year-old loves singing with this in the car. The songs are fun, silly, catchy, and great for pre-reading skills. I’m using it to teach in my Kindergarten and 1st grade music classrooms as well. I highly recommend this CD.

To order contact Liz directly, or purchase from Songsforteaching.com. 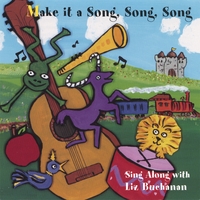 “Make it a Song, Song, Song” is Liz Buchanan‘s first great collection of original tunes and classic favorites. Children will love to boogie to the jazz beat of “Antelope Dance” and sing with familiar tunes such as “If you’re happy and you know it, clap your hands.” There’s a terrific train song, “Chugga Chugga Ding Ding,” and parents will love the updates of camp tunes such as “Boom Dee Ah Dah.” Liz has lots of friends playing and singing with her on the album, including a jazz band, flute and mandolin, and a whole gang of kids! Available through online retailers such as Amazon or contact Liz directly to purchase.