Gerald MacDermott’s Anansi book has appealed to children for many years.

Storytelling is a compelling art form that engages children in a story in a different way than a picture book. Storytelling has many valuable benefits, not the least of which is that the listener must mentally envision the story. My work as a music specialist has been greatly enhanced by my association with master storytellers for children, such as Boston-area tellers Andrea Lovett, Doria Hughes and Nicolette Nordin Heavey.

When I assessed four-year-old children for my work on my master’s thesis on music and literacy, I read several of them the fable of the Lion and the Mouse from an anthology that had relatively few pictures. Some were a bit put off by the fact that it wasn’t a picture book. One boy grumbled, “Is this a chapter book?”

In this era of short attention spans and plentiful screen time, it’s a good learning exercise to tell children stories with relatively few visual cues. Teachers would do well to hone their skills as storytellers, as well as helping students learn to create and tell stories. Storytelling in a group helps make children better listeners and prepares them for future years as readers of books without many pictures.

Adding a musical dimension to storytelling makes it more fun and engaging. If the tune is catchy, the children will soon be singing it. One of my favorite stories is a tale of the West African trickster, Anansi the Spider. There are many stories of Anansi to choose from. In the one I tell, Anansi asks the great Lion (or the Sky God, in some versions) if he can have some stories told about himself. The Lion laughs off this notion, and Anansi begs to be able to prove himself interesting enough to be the subject of a story. The Lion gives Anansi seemingly impossible tasks, such as bringing back a gourd full of bees and capturing the longest snake in the jungle.

I made up a simple song about Anansi with motions the children could quickly learn to imitate. Once children know the chorus of the song, they’re less likely to forget the bare-bones facts of the story:

Anansi the spider, oh, you can’t trick me.

Children wiggle their fingers across their other hand like a spider crawling on their hand. They tap their heads on the word “tricky,” and shake their finger on “you can’t trick me.” The bees and the snake in the story are the ones who insist Anansi can’t trick them, but of course, 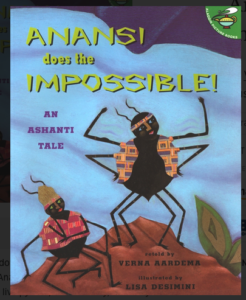 the little spider accomplishes the task in the end. I recommend Verna Aardema’s Anansi Does the Impossible for a longer version of this story.

I first told my version of the Anansi story years ago to a group of children at a school in Dorchester, MA. This was my first foray into an early childhood classroom in an urban school, and I had little experience in classroom management. As a result, music time – which lasted a full hour in each classroom – was often a bit chaotic. Yet when I told the story of Anansi, even the youngest children sat with rapt attention. As a novice storyteller, it was a magical moment for me. Soon the kids began asking to sing the Anansi song and wiggling their fingers across their hands. The knowledge of this important strand of folk culture from the Ashanti people – which migrated to the Americas during the era of slavery – had made its way into children’s consciousness through music and storytelling.

Using a companion song can often communicate the theme or message of the story.  The Anansi story I tell has a simple lesson: just because a spider is small doesn’t mean he can’t use his brain and accomplish big things.  At the end of the story, we sing the Anansi chorus and I ask the children, “Is it true that Anansi can’t trick anybody?”  Recalling the story’s details, the children are readily able to recite back the characters whom Anansi tricked. So I ask them to join me in changing the words of the chorus to:

Though he was very small, oh, he tricked them all!

To help keep the children engaged, I have used a few props in telling this story. I created a “spider” from a black button and some wire, which I keep in a very small cardboard box. I ask the children to guess what kind of creature is small enough to be inside this box. I also pass my spider around and let the children hold it. My other props are a music shaker that looks like a sweet pepper, which I use for the bees inside the gourd, and a stuffed snake, which I attach to my arm with rubber bands to show that Anansi has successfully tricked and captured the longest snake!