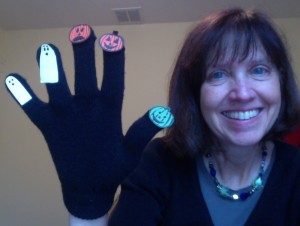 In a recent post, I discussed how finger plays make a body-mind connection and help children act out simple narratives with their hands. Finger plays are also simply great fun, and very engaging for young children.

I love to add a prop such as a glove with faces on it, or individual finger puppets. I use different gloves for various finger plays. One of my favorites for October is the traditional “Three Little Pumpkins.” I learned this one from my mom back when she did music with young children many years ago. I wrote the final verse about the ghosts! Be sure to keep the ghost fingers hidden until they pop out at the end.

The glove puppet is easy to make. Just buy a simple knit glove and stick paper faces on it with a glue gun or masking tape. You can also make more permanent faces out of felt and create the facial features with fabric paint. You can see the glove and hear the song in this video.

In a pumpkin patch on a great big hill

But I’ll be orange by Halloween.”

This one says, “It’s my big night

To be a jack-o-lantern bright.”

I’m going to be a pumpkin pie!”

But all three say, “What scares me most

Is that I just might see a ghost!”  Boo!

My second October finger play is a simple hand-motion chant. The kids also love the surprise in the end of this one. I find that some groups like to change what’s out there to something scarier than the wind. This is fine, as long as the kids in your group don’t get too scared!

Something at the Door

Better keep it shut (clap hands together), and close the latch! (turning motion with hands)

Peek out the window, and what do I see? (fists up to eyes like glasses)

The wind in the trees goes woosh at me! (make a big wooshing motion with your arms)

All original lyrics ©2012 by Liz Buchanan.