A Musical Comedy for All Ages Celebrates … Music! 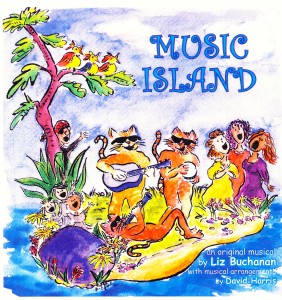 “Music Island” is back! My full-length musical comedy for all ages will be staged by the Youth Choir of the First Parish of Bedford, MA on June 10 and 11, 2016, directed by Janet Welby.

I invite everyone to sample the delight of Music Island. The show opens on an island governed by an ignorant buffoon, where music and other forms of artistic expression have been entirely banned. Life is dull drudgery until the island’s children experience a magical moment on the beach and begin singing.

The show features a diverse cast of birds, cats, silly grown-ups, delightful kids, musical muses, and a few would-be pirates. It’s a perfect show for young actors, with a variety of significant roles and songs appropriate to young singers’ voices. Not to mention the timeless message about the power of music and the arts!

To give you a taste of the music, listen to what the birds of the island have to say about a ban on singing here!  Later in the show, when the kids of the island and their musical muse companions get thrown into jail for singing, they drown their sorrows with an uplifting gospel number.

At the last staging of Music Island, here’s what some people had to say:

I saw Music Island last night – WOW!! I really enjoyed it!! Congratulations on the premiere – it was fun, engaging, musically sophisticated, and charming!! – Adria Arch, artist and former education director at Arlington Center for the Arts

Music Island is just a delight. The kids loved it. They just can’t stop singing the songs! The feedback on the show has been so positive. We feel so fortunate to have been part of the “premiere.” The show is a gem, wonderful for children’s theater to perform and enjoyable for all ages. Love that music! – Nancy Gilday and Roberta Zimmer, producers of the Arlington Children’s Theatre show in 2007

If you’re associated with a school or children’s theater, I hope you’ll consider Music Island for a future production!