Singing songs from Africa deepens cultural understanding as children learn that the continent of Africa is not a monolithic place but home to 54 countries, widely diverse cultures and perhaps as many as 2,000 languages. Many African songs are also just fun to sing, often carrying special energy and joy!

One of my best-used music books is Let Your Voice Be Heard! Songs from Ghana and Zimbabwe, co-authored by Abraham Kobena Adzenyah, Dumisani Maraire and Judith Cook Tucker.

This year, I discovered two African songs to teach my students. I was especially excited to learn one of them directly from singers from South Africa. 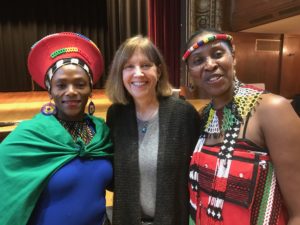 It was a special treat in the fall of 2018 to host singers from the South African chorus Imilonji KaNtu Choral Society, from Soweto. I had a chance to meet these lovely singers through the Boston area’s Sharing a New Song (SANS) chorus, which sponsors international choral exchanges. I began singing with SANS this year and am traveling abroad for the first time with them this month, to Uruguay and Argentina.

The Imilonji KaNtu singers offered songs from a variety of cultures and traditions in South Africa. You can see them sharing “U Mandela Usilethela Uxolo” in this video taken at a school in Dorchester, MA. The lyrics of this song mean, “Nelson Mandela, you bring us peace.”

As a children’s musician, I took special interest in a song that Imilonji sang about an ape climbing a tree to get some food (sap from the tree). I asked my two friends Bongi Mkhithi and Petronella Onverwacht if I could make a video of them singing it and teach it to my students.

The title of the song is “Kgabo.” The words are in the Setswana, one of 11 official languages spoken in South Africa, and one of nine indigenous languages listed in the post-apartheid constitution. Here are the lyrics, followed by translation and a guide to pronunciation.

For young children, you can explain that a great ape would be an animal such as a chimpanzee, gorilla, orangutan or bonobo.

I also enjoyed singing a Congolese song, “Olele,” with my students. This song, in the Lingala language, is about a child rowing a boat on a river with a strong current. Because my children were just starting music class in the fall, we only sang the first two parts of the song. They enjoyed doing a paddling motion with the song, as well as keeping the beat with egg shakers.

You can find a video cartoon of “Olele” here. For full lyrics and notation, go to this page of the Beth’s Notes website.

Let me know if you sing one or both of these songs with your children, or share other songs from different cultures that you enjoy.