Why Music for Kids? 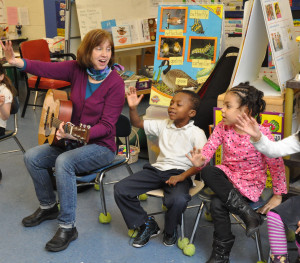 Kindergarteners enjoy a literacy lesson with a musical component.

There is a great body of research showing the importance of music in children’s lives. But even if there were no research at all, it’s simply a fact that most kids love music and it’s good for them. For those reasons alone, music should be an essential component of preschool and school curricula. But some folks among the powers-that-be seem to think music is expendable. Here are some pointers to set these misguided people straight.

– Music is good for the BRAIN and is beneficial to LEARNING across the curriculum.  Music enhances cognition, memory, emotional well-being and connection to our fellow humans.

– The childhood years are a key time, developmentally, to expose humans to music and thus build their musical intelligence and aptitude.

– Musical development has been shown by many studies to be related to literacy learning and is perhaps the best tool available for teaching phonological awareness. Music, especially in combination with movement, props, visual cues and instruments, can hold children’s attention longer than most other methods of teaching. Young children learn through play, and music is a form of play. Quite simply, it’s fun!

– Music, especially group singing, is an excellent tool for building classroom community.  Music is a non-competitive activity in which everyone can participate.  It helps children feel good about themselves, engaged with their classmates, and excited about being in school.

Need evidence? Start with Harvard’s Howard Gardner, who posited the theory of multiple intelligences. Gardner named music as one of his seven original core intelligences. His theory asserts that there are different types of intelligence, i.e. humans learn in diverse ways. Some learn best through language, others through visual, spatial, mathematic or kinesthetic presentations of knowledge. And some learners are particularly drawn to music as a way of knowing and understanding the world.

Regardless of musical aptitude, all children are born with an innate potential to learn music. But that potential is greatly influenced by how much children are exposed to music. Professor Edwin Gordon, a leader in the field of early childhood music education, wrote in 1998, “If a very young child has no opportunity to develop a music listening vocabulary, the cells that would have been used to establish that hearing sense will at best be directed to another sense, perhaps the visual sense will be strengthened at the expense of the aural sense. No amount of compensatory education at a later time will be able to completely offset the handicap.”

Whoa! So a child could be very musically intelligent, to use Gardner’s term, but could totally get short-changed if she/he weren’t ever exposed to music in the early years. Gordon’s research was an influential factor in the development of parent/child music curricula such as the nationally-franchised Music Together program, designed to get families involved in singing and making music with young children. Good for them: starting early to develop that musical intelligence, while also having a lot of fun. Check out any music class for young children and you’ll see what I mean! Professor Lili Levinowitz, one of the developers of Music Together, maintains that singing and understanding music are essential to being fully a part of one’s culture, “as much a basic life skill as walking or talking.”

Research has also shown that developing basic music skills has direct ties to learning and achievement in reading and other academic disciplines. In his book Music as a Way of Knowing, choral director and composer Nick Page writes: “When a class gathers to sing or make music, they are doing something quite ancient and powerful. Group singing is a communal form of play, a joyful ritual bringing everyone together … A student who feels a powerful connection with the rest of the learning community will also feel a powerful connection to the process of learning itself.”

A study from more 40 years ago in Hungary showed a correlation between daily music instruction and improvement in students’ academic performance in other subjects. This correlation has been tested repeatedly in the United States, with further positive results. One study of preschoolers found that those who participated in regular music sessions over the course of several months performed better on phonological awareness assessments. A multi-year study in Canada showed positive correlation between students’ ability to tap a regular rhythm and their ability to hear letter sounds. Still another study found that young children’s achievement in literacy skills improved through the use of music in literacy instruction. You can find specifics of all these studies in an earlier article on this blog.

One early-childhood music franchising business, Kindermusik, a program similar to Music Together, found music so valuable to learning that they are now marketing their own music & learning program to schools and preschools, supported by much of the research mentioned here.

It’s just common sense: for today’s children, increasingly drawn into the often passive world of television and other electronic media, music is not only engaging and fun, but stimulating to the brain, enhancing learning on many levels. In a 1997 article in Early Childhood Education Journal, Susan Snyder calls music “remedial interactive activity for under-stimulated brains.” How could any school or preschool NOT have music instruction as a major component of its mission?