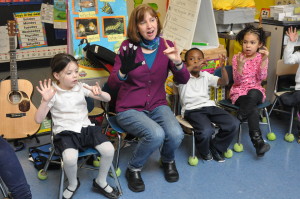 Why are finger plays great learning tools for young children?

You can have some fun with the traditional “Two Little Birdies” rhyme by adding different birds and animals and rhyming names.  You could also discuss consonant sounds by featuring the same initial consonant for the names, as I’ve done in my original version of the song, which you can download at this link: http://www.cdbaby.com/cd/lizbuchanan2

One named Rob and one named Ree

Fly Away Rob, Fly away, Ree

Come back Rob, come back Ree.

One named Bob, one named Bill

Hop away Bob, Hop away, Bill

One named Fred and one named Fee

Swim away Fred, swim away Fee

Come back Fred, come back Fee.

For even more creatures for the song, click here. For a visual element beyond using your fingers, add stick puppets with the initial consonant. This video shows the hand motions and the stick puppets.  https://www.youtube.com/watch?v=RQ6c9Tru9FM

Here is the Bee Hive (Traditional)

Here is the beehive, where are the bees?

Hiding away where nobody sees

Watch them come creeping out of the hive

One and two and three four five!

Turn this finger play into a “supersize” activity by having children act out the parts of the bees. Expand movement vocabulary by changing the word “creeping” to jumping, dashing, bounding, leaping, fluttering and stomping.