Home Phonological Awareness Highlights of My Year for Music & Literacy

Highlights of My Year for Music & Literacy 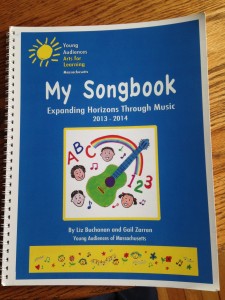 The songbook we created for Horizons for Homeless Children.

2014 was another super year for my work singing with kids and focusing on early literacy learning. Among the highlights were my new songs for learning about rhyming words: Animal Rhymes and Halloween Rhymes.

I hope these songs will soon become part of the music/literacy recordings that I sell through my page on Songs for Teaching.

I also enjoyed another stellar songwriting residency with first graders in South Boston, sponsored by the VSA-Mass Cool Schools program. Inviting students to tap their creative spirits is always so rewarding!

It was also another great year for my work with Horizons for Homeless Children. You can read more about this worthy organization at their web page, and find out how to donate or volunteer.  Now in its fourth year, our music-literacy program helps enrich the children’s literacy learning through music and movement. A big hand for Young Audiences of Massachusetts Healing Arts for Kids, the enthusiastic sponsor for this program.

We sing many of my original songs at Horizons, but also share the time-tested basics, traditional nursery rhymes and songs. At the end of the year, we collect our favorite songs in a book we give to each child. Gail Zarren of Young Audiences is an indispensable partner in putting this project together! The book always includes a CD, lyrics, notes to the families about how the song can be used for learning, and follow-up activities. It’s also translated into Spanish.

For example, one of our favorite songs in 2014 was “This Old Man.” Here is what we put in the book for that song:

With a knick-knack paddy-whack, give a dog a bone (woof!) this old man came rolling home.

Hand motions  – Hold up fingers to show each number in the song, then do a simple motion for each rhyme, such as tapping your shoe or knee, or making a fist for the bee hive. Tap on your legs for “knick-knack paddy-whack,” hold up a pretend bone to your mouth, then make a rolling motion with your hands for “rolling home.”

Notes for the Family – This fun song has been a children’s favorite for well over 100 years. Like most children’s songs, it has a regular rhyming pattern, which helps children distinguish letter sounds and forms the basis for learning to read. The song also has a counting theme. You can continue singing the song up to ten, with these rhymes: six/sticks; seven/heaven; eight/gate; nine/spine; ten/again.

2014 was also the year that I started posting on this Music/Literacy blog. If you have become a reader, thanks so much, and please help me spread the word! I’m starting to make exciting plans for 2015, with new recordings, new songs and more.