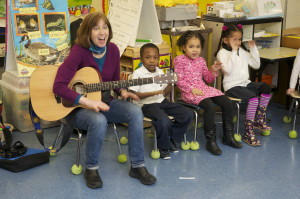 Singing in the classroom can have a strong connection to enhanced early literacy skills.

Many academic studies have shown a strong connection between musical activities and early literacy learning. One study that especially interests me is detailed in “Early Language Learning With and Without Music,” by Douglas Fisher, published in Reading Horizons in 2001.

The study evaluated four classrooms of students in kindergarten and first grade. The students were all English Language Learners who spoke Spanish at home. Two of the classrooms began the day with a song and added particular musical activities to reading instruction time, while the other two did not. The students in the classrooms that used music scored higher on reading assessments.

Most of the preschool and kindergarten teachers I meet understand the power of music for their students, but they often don’t know how best to use music to enhance student learning. Most early-reading curricula give some lip-service to singing (no pun intended). A song may come with each week’s lesson plans, but the song seems an afterthought and not that engaging. To put it nicely, these songs aren’t destined for the top 40.

In the Fisher study, the songs seemed more integral to the lessons, as though each lesson would lose its heart without the song. For instance, in one activity, the children had to find a mystery word in scrambled letters. For the classes using music, the mystery word was a song title, and when the students discovered the mystery, the teacher would play a recording of the song. As one teacher commented, “See how they love to find the mystery word? They know we’re going to sing a song and that the CD with the words will be available in the classroom library after we learn it. The connections they make are great. They know the words because we sang together. On their own, they get to see the words in print and hear them over and over again.”

As I’ve worked as a teaching artist in kindergarten classrooms, I’ve had teachers ask for particular songs to work on certain skills. The teachers (and their students) were tired of rote chanting of letter sounds and rhyming word families: B-Buh-Baseball and fat-cat-sat-mat. I was able to make musical connections that made the lessons more engaging for both teachers and students.

I’d love to see more teachers trying these songs in their classrooms. In my collection, Songs for Rhyming and Reading, there are songs for clapping syllables of words, emphasizing starting consonants, reciting long and short vowels, guessing rhymes and making word families. You can find this collection and many other early literacy-related songs on my page at Songs for Teaching.

For instance, in my song “Animal Hand-Clapping Rap,” students can learn about interesting creatures such as a cockatoo or coatimundi while clapping syllables. Teachers can change the pace by using the same song featuring food words. This link goes to an article with more musical syllable clapping ideas: http://www.antelopedance.com/phonological-awareness/musical-fun-with-syllable-clapping/

In “I Like My Hat,” students have a chance to expand the song into a writing activity about their favorite hat color. They’re invited to make up rhyming lines such as “My hat is blue, I stick it on with glue,” or “My hat is yellow, I wear it and say hello!” There’s also a chance to be creative and color a fancy hat. You can find more about these songs here: http://www.antelopedance.com/phonological-awareness/more-fun-songs-for-rhyming-reading/

These songs are simple but fun, and just might take some of the drudgery out of phonological awareness learning. And they might help improve those assessment scores!