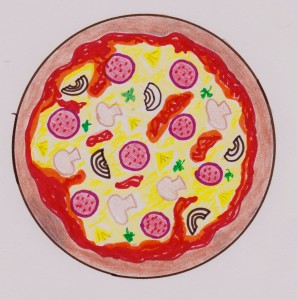 If you’re helping kids learn letter sounds, there are no better teaching tools than simple songs and rhymes. I’ve already written in this blog about how nursery rhymes help children learn about rhyming words and vowel sounds; they can help teach about consonant sounds, too. Many nursery rhymes and songs utilize alliteration, or using several words in a row with the same starting sound.  “Peas porridge hot” is a good example, as are “Peter Piper,” “Diddle-diddle dumpling,” and “Miss Mary Mack.”  You can help children distinguish the letter sounds by repeating the title/first line of the rhyme several times, and saying the starting letter, and showing the written letter to the children.

You can also make up simple letter-sound songs, like this one I wrote. It’s about a favorite food, pizza! Pizza has several common toppings that start with P. You can discuss the starting sound of other pizza toppings such as mushrooms or onions, and you can slightly alter the song to incorporate other foods with different alliterative letter sounds: confetti on the cupcakes, horseradish on the hot dog, salami on the sandwich. A simple recording is here. The lyrics go like this:

Should it stay or should it go?

Should it stay or should it go?

Two other songs that I use all the time for teaching starting starting consonant sounds are “The Muffin Man” and “Two Little Robins.” You can find out more about how I use these songs in this article for Pass It On! The Journal of the Children’s Music Network.