Rhyming Songs with Animals (For Kids!) 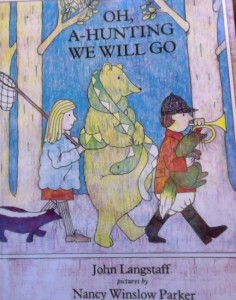 Here are two rhyming songs that I’ve recently shared in the classroom. I pair a classic nursery song and book, “Oh, A-Hunting We Will Go,” with a song I wrote, “Animal Rhyming Words.”  This video shows how I work with the first song.

I recommend getting John Langstaff’s book,”Oh, A-Hunting We Will Go” as a companion to this song and rhyming activity. It’s published by Aladdin Paperbacks of Simon & Schuster and illustrated by Nancy Winslow Parker.

The lyrics of the Langstaff book are as follows:

We’ll catch a goat and put him in a boat

We’ll catch a whale and put him in a pail

We’ll catch a snake and put him in a cake

We’ll catch a mouse and put him in a house

We’ll catch a pig and put him in a wig

We’ll catch a skunk and put him in a bunk

We’ll catch an armadillo and put him in a pillow

We’ll catch a fish and put him in a dish

We’ll catch a brontosaurus and put him in a chorus

We’ll just pretend and in the end, we’ll always let them go.

You can follow this activity with my song, “Animal Rhyming Words.” I start by demonstrating rhyme-guessing with a teacher. I say, “Out barking in the fog is a -” and the teacher fills in “dog.” Very quickly some of the kids will pick up on the game and start guessing. Lots of fun!

You can hear a very basic recording here on my Sound Cloud site.  Here are the lyrics:

I’ll say a word that ends the same

And you make a rhyme with an animal name.

Out barking in the fog, is a dog.

With long ears so funny, it’s a bunny

And sneaking through my house is a mouse.

And chasing a rat, there’s a cat.

Now he’s napping on the mat,

And wearing a silly hat!

Coiled around my rake is a snake

Acting kinda funky is a monkey

Giving milk now is a cow.

Buzzing near the tree is a bee

Now it’s on my knee.

What a sight to see. Oh me.

Right there in the box is a fox

And combing his hair, there’s a bear

He’s sitting in a chair!

One Response to Rhyming Songs with Animals (For Kids!)