Home Reflections Can We Please Let the Kids Play?

Can We Please Let the Kids Play? 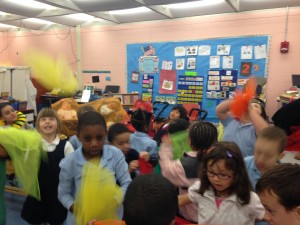 Educator Bev Bos, who recently passed on, famously said, “If it hasn’t been in the hand, the body and the heart, it can’t be in the brain.” The Roseville Community Preschool, which she founded in Northern California, is dedicated to experiential learning. Children are constantly moving, exploring the world through all their senses, following where their curiosity leads them.

Meanwhile, for so many young children, school has become a place where free-play experiences are few and far between. We have great intentions for training our young kids to be ready for college and the economy of tomorrow, and I applaud those intentions. But in our zeal to give all children the education they need and deserve, many of us have forgotten to incorporate the very activities that could help children most, activities that stir imagination and creativity, as well as exploring conflicts and concerns they experience in the world around them.

It’s a mistake to consider children’s play to be the opposite of learning or academic rigor. Let’s stop and ask: what does academic rigor look like for a child aged four, five or six? To me, there should be a “both-and” approach. For some aspects of learning, we can sit young children down, remind them about good listening habits, and have them chant letter sounds, numbers, words and phrases.

And other times, we simply need to set children free. Give them totally open-ended opportunities to create fantasy worlds with their classmates, design block structures, write and act out stories, and move their bodies to learn things (not just to take a wiggle break).

I didn’t originate this idea, of course. I’m a creature of my educational experience at Lesley University, where I received my M.Ed. in 2009. My master’s degree is in Creative Arts in Learning. My Lesley professors only rarely gave a Power Point. They were more likely to arrive in the classroom pretending to be educational theorist Paulo Freire so we could learn about critical pedagogy, or having us wave scarves and create a movement activity for an exploration of diversity.

One of Lesley’s foremost spokespeople for learning through play is Professor Emeritus Nancy Carlsson Page. I was moved by her TEDx talk, in which she tells a personal story involving her son Matt (actor Matt Damon), as an illustration of how young children think and therefore, how educators should respond.

I also recently re-read the LA Times article about schools in Finland, frequently shared on the Internet, and well worth a look. In Finland, children do not begin formal academic learning until age seven, yet their overall academic achievements are among the highest in the world.

I hope to write several blog pieces about the role I see for play in our classrooms. For now, here are a few ideas I’ve gathered from my own teaching experience and workshops I’ve attended.

– Learn vocabulary through your body. It can be something as simple as a finger play. Tommy Thumb is my character and he is illustrating today’s vocabulary words. Tommy is bold! Now he’s timid. Now he’s inconsiderate. Now he’s kind.

– Deepen learning about a story through movement and musical storybook theater. I’ve written songs to provide a musical structure in which kids can act out classic folktales such as the Three Little Pigs, the Three Billy Goats Gruff and Sleeping Beauty.

– Create an ongoing play structure to invent a world in the classroom. Students run a flower shop, farm stand, library or bookstore. Or they organize an event such as a festival or family event. One class I know organized a wedding. Another class actually organized a funeral and engaged in fantasy play about life after death. It sounds morbid, but the kids seemed interested to explore themes of death and loss, which had recently touched some students’ families.

This whole blog is really about playful learning activities. If you like what you read here, I hope you’ll look through the archives and find many more activities and songs that help children learn and play!