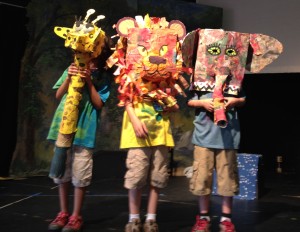 On our family’s lake house vacations when I was growing up, I’d direct musical plays starring my younger sister and three cousins. I made up the script and even wrote songs for a silly Sherlock Holmes drama one year.

Years later, I get to revisit our lakeside theater experience by directing children aged 6-8 in a two-week drama camp at the Arlington Center for the Arts, a program now in its ninth year. Our play is always original (I write it collaboratively with the campers) and features music and movement. We also get daily use of a visual arts room and art supplies, so we create costumes, props, scenery and more.

The heart of the experience is a chance for children to explore their own creativity. I make the projects and activities as open-ended as possible, and encourage the campers to try different techniques to produce unique results. Sometimes happy accidents occur: at this year’s session, some of the kids started painting their paper towels after they’d dried their hands. Soon we had lots of paper towel abstract art.

Rather than have a lot of colorful paper towels lying around, I decided to turn them into a project. Our theme was “Jambo, Africa,” and the plot set-up is that a group of Americans go on safari then get whisked off on a magical journey to learn about African people and culture.

For the “safari” part of the show, I decided to use the paper towels to collage some 3-D animal heads. This is a bit beyond my skill set; I’m mainly a musician, not a visual artist. So I asked my fellow instructor, art teacher Sue Rice, how she’d make them. She suggested collage on paper grocery bags, with cardboard to give them dimension for the facial features. By Friday, our paper-bag collaged elephant came to life.

The kids collaborated on the collaging and painting and I put the creature together. In the following week, we added a lion and a giraffe, with a neck made from a tube of mural paper. Counselor Gus and I added some of the facial detailing.

The animal heads were definitely a huge hit in our homemade play!