Musical Learning with The Three Bears 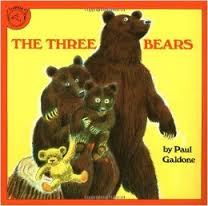 Paul Galdone’s book is a great accompaniment to this musical lesson.

The story of the Three Bears is a fun way to help children learn about high, medium and low pitches. This idea is not original to me (I’ve referenced some lesson plans below), but I found a way to involve students playing different instruments and repeating lines of the story.

The drums, the lowest instrument, are for the Papa Bear. Next comes Mama Bear, represented by tambourines and/or smaller drums. The baby bear is represented by the highest-pitched finger cymbals and bells. I’ve abbreviated the story line slightly so that there’s less talking for the teacher and the kids have the maximum opportunity for playing instruments.

Spoken lyrics with the rhythm:

Goldilocks is represented by the glockenspiel. She has the same rhythm as above and her melody is:

The teacher reads or tells the story using the suggested script that follows. Students can be invited to join in the repeating lines. Each part above should be played on the instruments when that character is underlined.

Once upon a time, there were three bears, Papa Bear, Mama Bear and Baby Bear. One day, their breakfast porridge was too hot, so they decided to take a walk and let it cool.

While they were gone, along came a little girl named Goldilocks. She knocked at the door but no one was home, so she thought she’d check out this little house in the woods.

Goldilocks tasted each bowl, and the littlest bowl tasted just right, so she ate it all up.

Goldilocks tried out the first two chairs but they were too big. The Baby Bear’s chair looked just right! Except – oops! It broke apart when she sat in it!

She tried the first two beds but the Baby Bear’s bed was the one that felt just right. She soon fell fast asleep.  I wonder what will happen to Goldilocks.

The three bears soon came home.  They saw their porridge bowls. (Tap instruments on the bold syllables, as indicated in the lines that follow.)

Mama Bear spoke next. Somebody’s been eating my porridge.

Then Baby Bear piped up:  Somebody’s been eating my porridge and they ate it all up!!  (Go crazy on the instruments on this last part.)

Next they went to their chairs.  (Repeat similar taps for each line.)

Papa Bear spoke first: Somebody’s been sitting in my chair.

Mama Bear spoke next: Somebody’s been sitting in my chair.

Then Baby Bear piped up:  Somebody’s been sitting in my chair and they broke it to bits!

Finally, they went up the stairs and saw their beds.  (Repeat similar taps for each line.)

Papa Bear spoke first: Somebody’s been sleeping in my bed.

Mama Bear spoke next: Somebody’s been sleeping in my bed.

Then Baby Bear piped up: Somebody’s been sleeping in my bed and here she is!

Goldilocks awoke with a start! She jumped out of bed and out the window!

Goldilocks ran away and never, ever came back again to the house of the Three Bears.

I’ve written a full song about the Three Bears. It’s a great way to end this lesson. You can download it and find the lyrics here at Songs for Teaching.  You can hear the song here.

Here are some lesson plans that helped inspire me: