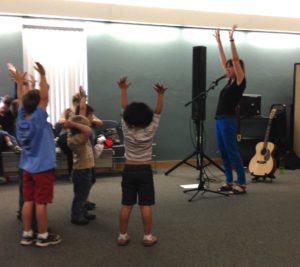 Children can learn about opposites of up and down or high and low by moving their bodies.

Introducing children to musical opposites is a great way to introduce basic musical concepts such as tempo, dynamics and pitch. It’s also a good way generally to introduce the concept of opposites.

Children can learn about the concept of opposites with my song, “The Opposite Game,” which is on my album Singing All the Way Home. Children also enjoy playing an “opposite movement” game, in which the leader asks children to do a certain motion and they do the opposite. Examples: Stand up! (Children sit.) Wave up high! (Children wave down low.) Yell really loud. (Children make a quiet sound or no sound.)

To teach about tempo, I do a fast-slow opposites lesson using the Tortoise and the Hare story and my song based on the fable. You can learn more about that lesson here. When I teach about tempo, I also enjoy singing and moving to certain songs very fast and then very slowly. One of my favorites for this activity is the Spanish language song, “Mi cuerpo hace música” (My Body Makes Music) by Gil Raldiris. You can hear a rather fast recording of this song by Sol y Canto here. I ask the children if they would like to sing and move to the song “Muy rápido” (very fast), and usually the answer is yes. Sometimes, however, it’s good to slow things down and go “muy lento.”

Children love making a lot of noise, so an opposites lesson on dynamics can also be lots of fun. I learned the poems “Loud” and “Soft” by Jeff Moss from a Boston-area music teacher, Kimani Lumsden. Visiting Mr. Lumsden’s music class with young children, I watched how he led the children in acting out the sounds in each of the poems.

The banging of the trash can

The honking in the street

The roaring of a lion

The stomping of your feet

The booming of the thunder

The yelling of the crowd

All those noises are sounds that are LOUD!

The whisper of a secret

The humming of the bees

A lullaby at bedtime

As wind blows through the trees

Swirling to the ground

Those things are quiet – shhh! Don’t make a sound.

You can continue the loud-soft contrast by leading children in singing songs with varying dynamic levels, or by moving like quiet and loud animals (say, elephants vs. mice). I hope you enjoy engaging children with these musical opposites! Look for a second installment on this topic soon, including the cool “feather lesson” that I learned while visiting the Musical Instrument Museum in Phoenix!