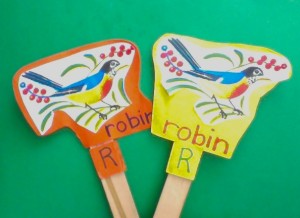 Here is a finger-play and simple literacy activity that’s especially fun to do in the spring when you hear lots of birds singing. My “Two Little Robins” song is based on the traditional nursery rhyme and finger play that’s often called “Two Little Blackbirds.”

This song is on my CD Once Upon a Tune, available through CDBaby or Songs for Teaching. You can see a video of how I use the song at this link. https://www.youtube.com/watch?v=RQ6c9Tru9FM

Below are the lyrics and the connections to literacy learning.

One named Rob and one named Ree.

One named Bob, one named Bill.

Hop away, Bob, hop away, Bill.

One named Fred and one named Fee.

Swim away, Fred, swim away Fee.

Come back, Fred, come back Fee.

Here are some ways this song can help build early literacy skills:

1. Rhyming. Nursery songs and rhymes are perfect for helping children hear and learn about rhyming sounds. With this rhyme, you can talk with children about how ‘tree’ and ‘Ree’  and ‘hill’ and ‘Bill’ sound alike, and discuss what sound is in both of those words.

2. Consonant Sounds. This song helps with learning about the sounds of the consonants R, B and F.  In each verse, the names of the creatures start with the same letters; for example, R is the beginning letter for robin, Rob and Ree. Articulate the sound of the letter with the children and then say the words in the rhyme that start with the letter.

3. Letter recognition. Use a simple stick puppet with the word and letter of each creature, or write out the words on a card. Discuss each starting letter and its sound.

You can create stick puppets with tongue depressors and pictures of the creatures, which are easy to find in books or online. My robin pictures come from the beautifully illustrated book Over in the Meadow by John Langstaff, illustrated by Feodor Rojankovsky. Add the word itself and the featured consonant for letter sound learning.

You can expand this song to include many other birds and creatures with their initial consonant sounds. I’ve posted more ideas here at The Children’s Music Network’s blog: http://blog.cmnonline.org/2013/09/23/a-tale-of-two-robins/

Here are some learning activities that connect to the song:

Matching Birds and Sea Creatures – Create cards with a picture of each bird and sea creature in the expanded song (above). On each card print the letter and the type of creature. Mix them up and ask children to find matching pairs. You can play this as a “Concentration” matching game.

Stick puppets – Create stick puppets for the creatures similar to the ones in the photo. Encourage children to act out the song with the puppets.

Auditory Learning – Online, you can find recordings of different bird songs for the different species of birds in this song. Listen to the recording of each bird’s song as you look at a picture of that bird.

Movement Play – For a gross motor activity, act out each creature in the song with a movement. Flap arms to be a bird, hop to be a bunny, do swimming motions to be a fish.

Outdoor Activity – Go bird watching! How many different kinds of birds can you find as you take a walk around the neighborhood? What do you notice about the birds’ behavior? Talk about what birds eat and their habitats. Discuss the life cycle of birds.

Have fun with all the sounds of nature in the spring!