Home Phonological Awareness Cat-bat-sat-hat: Say a rhyming word with that!

Cat-bat-sat-hat: Say a rhyming word with that! 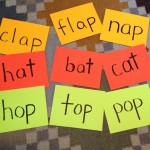 This article is the second in my series about teaching rhyming and vowel sounds through music. Here, the focus is on working with children who are starting to understand what rhyming is all about.

When a child gets the concept of a rhyme, that’s huge! Their ears are hearing distinct vowel sounds, and they begin to discern distinct ending and beginning consonant sounds. The initial consonant sound of a word is known as the onset while the remaining vowel and end consonant sounds are called the rime.  Understanding onset and rime is an important stage of phonological awareness, that is, the awareness of sounds in language.

Once a child hears that cat, bat, sat and hat are all rhyming words, s/he will soon be ready to initiate rhymes.  Songs for initiating rhymes are lots of fun!  In fact, one of the best kinds of songs for initiated rhyming is a zipper song, into which you can “zip” suggestions from the children.  Some examples:

–  “Down By the Bay,” a traditional song recorded by Raffi and many others, features the “whale with a polka-dot tail” and “llamas wearing pajamas.” Singers can add endless variations.

– Dennis Lee’s “Alligator Pie” is wonderful poem into which you can “zip” various “alligator foods” and component rhyming words. I first heard the poem in my daughter’s kindergarten class, and later heard Boston children’s singer Hugh Hanley adapt it as a chanting activity. Joanne Hammil wrote a song version, which is on her “Pizza Boogie” album.

– “Ants in Your Pants,” by Johnette Downing, is another rambunctious body parts rhyming song.

One of my favorite songs for helping kids make rhymes is the traditional song “Dr. Knickerbocker.” It’s fairly well known in kids’ music circles, having been featured on at least two children’s TV shows and in numerous books.

It’s mainly a rhythm-keeping song, inviting listeners to tap, clap, stomp or shake the rhythm with various body parts. My version of “Dr. Knickerbocker” also invites children to initiate and sing rhyming lines and count down from nine.  You can sing the tune I wrote and recorded on my CD, “Singing All the Way Home,” or do this rhyme as a chant, beginning with the first verse:

Inexplicably, most versions of the song/chant never go below nine, and some have no numbers at all. My version counts down to one, and many children like to add zero.  Here’s the rhyming activity: for each number as you’re counting down, invite your child (or classroom) to think of a rhyming word.  Then come up with a line that uses the word.  Or just sing or say the existing lines and ask children to fill in the rhyming end-words. For instance, with “eight,” the children might come up with the rhyming words late, date, gate, weight or state, leading to the following lines:

Today is Monday, what’s the date?

If you’re running late, open the gate!
My backpack has too much weight.

Massachusetts is my state.

This is such a fun game, kids will hardly know they’re also learning about phonological awareness!