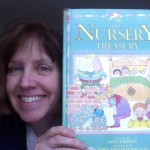 When I was growing up, it seemed most kids knew Mother Goose rhymes. These days, that assumption no longer holds. In my summer camp for children aged six to eight, we play a trivia quiz game in which I sometimes ask the children to finish a nursery rhyme after hearing the starting line. It’s a shock to me how many of these children can’t readily recite nursery rhymes.

We’re moving away from a norm in America in which children all know a certain set of rhymes, stories and songs. It’s not just that our population is more diverse, it’s that every parent and caregiver is making different choices.

Is it crucial for kids to know, from memory, about the little old woman who lived in a shoe, or Old King Cole? Not necessarily, but it is important for early literacy – in fact, I would say essential – for children to recognize and even memorize rhyming passages, whether it’s from Dr. Seuss, Shel Silverstein, The Old Lady Who Swallowed a Fly, or Mother Goose.

Literacy experts universally recognize rhyming and word play as an essential element for building phonemic awareness, the awareness of the distinct units of sound in speech. Through sharing rhyming songs and poems, adults can provide a playful and age-appropriate way for children to begin distinguishing different sounds.  Returning to the same rhyming materials many times provides an important element of predictability as children begin on their own to internalize and recite the matching sounds. Through regularly singing and enjoying almost any rhyming song or poem, with intention, children will soon begin to identify words that rhyme. When I say “with intention,” what do I mean? Consider the following example, using a classic nursery rhyme, Peas Porridge Hot.

Start by reading or saying the rhyme with the child several times, until the child begins to grasp the words and perhaps join in.

Let’s unpack it. First, you have a great alliteration activity going. You’re even starting with a letter name – P.  Second, you have a rhyming pattern, with predictable end words.  The second “stanza” of this ditty is perfect for inviting the child to fill in the rhyming end words after they’ve heard the rhyme a few times.

There’s a chance to talk about opposites: hot/cold. It’s not in the rhyme, but what’s the opposite of old? There are actually two: young or new! The rhyme is vocabulary building, too. Most of us don’t use that antiquated word, porridge, in everyday speech, although the word comes up again in the Goldilocks story. But who would make it out of peas? So there’s an element of kid-friendly humor. Would you like hot cereal made out of peas? Would it taste good if it had been sitting in a pot for nine days? Eeww!

Finally, you have a steady 4/4 rhythm to beat with hands, legs or feet, or with partner variations for slightly older children. You can pair up and clap or tap a steady beat on the first two beats of each line, followed by slapping the partner’s hands (high-ten style) on the end words. This activity may not come naturally at first for many young children, but don’t give up! Most children enjoy this kind of simple partner game and the social interaction it offers – it’s also fun for a child to try it with a teacher or other adult.

Do this same type of activity with many other nursery rhymes such as those below. Once the children are familiar with the rhymes, ask them to fill in the rhyming end words.

One, Two, Buckle My Shoe

Jack and Jill (I like doing this with rhythm sticks; one stick is Jack and the other Jill. We make them fall down one after the other.)

Humpty Dumpty (This is fun with shaker eggs. Let an egg sit on your hand and fall onto the rug when Humpty falls off the wall. Have a second egg to tap the floor as the horses and men come in to save Humpty. I usually go “poof” at the end to restore Humpty to good health, which permits us to do the rhyme again – and again.)

Aside from the rhyming aspect, chanting and tapping in regular rhythm itself has important connections to early literacy. The studies referenced in my previous post underscore the importance of rhythm and the relationship between musical instruction in the early years and students’ level of reading achievement.