A few days ago, I experienced a small Christmas tree disaster, truly a first-world problem. I was on my own putting up the tree, and could NOT get it to stand up straight. I must have tried for an hour, straining my hands on those screw-things on the stand, tightening and then loosening, then tightening again.

The tree finally seemed to achieve an acceptable level of stability. It still looked a little odd, but whatever. I decorated with two strings of lights and red and gold beads, followed by a few ornaments. Gave it a nice drink of water, and took a break.

Then, as I was finishing making dinner in the kitchen – uh-oh. The whole thing went sideways. Water on the floor, lights all askew, the beads, just forget it.

This too shall pass. I righted the tree, wiped up all the water and fixed the lights. I was done with the beads and put them away. I took the night off and went to a friend’s Christmas party, where we sang carols around his beautiful grand piano.

Waking on Sunday morning, I found the tree standing straight and tall. I began putting on ornaments,  thinking of people from Christmases past and present. Here are a few of those thoughts.

My grandmothers were longtime Christmas visitors. My two grandfathers died in the same year when I was in college, and my mother invited the grandmothers to spend Christmas at our home in Bethesda, Maryland, starting a tradition that lasted about 12 years. The grandmothers, Ida Jakes and Eloise Moore – known to us as Gran and Ma – arrived each year bearing cookies (cheese cookies, fudge cake, rum balls, lemon squares, mini-fruitcakes) and savory treats (I had a love-hate relationship with the Chex mix).

Gran, who was tremendously talented in sewing and other needlework, often brought an ornament she’d made 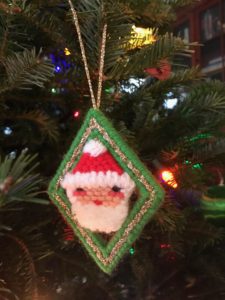 with needlepoint. I continue to take them out of the ornament box each year, thinking of the laughter and sense of fun she always brought to us at Christmastime.

My late mother-in-law, Alice Knobloch, was a perennial ornament maker (I do not refer to her as my ex-mother-in-law; she died before I got divorced). Most of her creations have been lost, but I continue to

remember her with at least one decoration on my tree each year.

The pear on the tree makes me think of my companion Gordon’s late parents, Dorothy and Bob MacFarland, who always sent a box of delicious pears at the holidays. The cookie ornament above it in the photo was a gift from a local preschool, a reminder of how much I continue to love making music with children. 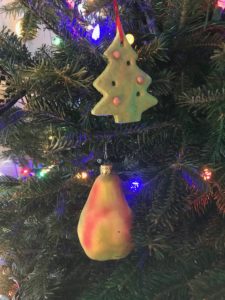 My late mother, Betty Buchanan, never made ornaments, but one of my favorites on her tree was the white-coated girl in the stocking cap. There were originally several in different colored felt dresses, and I thought they were angels, even though they didn’t have wings. That was my mother, an angel without wings. 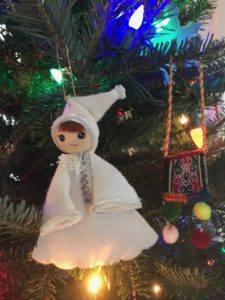 My dad died last March, two weeks before his 90th birthday. I remember him by hanging a blue snowflake on the tree, a recent addition to my collection from a local crafts fair. It will be a blue Christmas without him. The 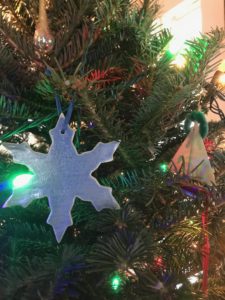 snowflake also makes me think of his snowy white hair, and how he continued to be a handsome and charming fellow up until his final days on earth. Even in the last few months of his life, when he had to live in the memory-care section of his assisted living, he attracted a new “friend” of the female persuasion. Though she had Alzheimer’s, she enjoyed sitting next to my dad and reading him the newspaper.

I divided my Christmas time during recent years between the DC area, visiting my dad, and New Orleans, visiting my daughter Tor. This year, Tor went back to school in the Pacific Northwest, driving cross country to Olympia with my other daughter Molly last August. On those cold December days, I especially miss New Orleans and my visits to Tor there, where it could sometimes top 80 degrees during the holidays. I found 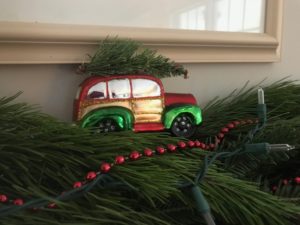 some wonderful New Orleans ornaments, including a car with a Christmas tree on top. On my mantle, it’s headed west, toward Olympia.

The collage heart ornament is hung in honor of my sister, Lynn, who’s struggled in recent years but continues to hold her head up. She makes 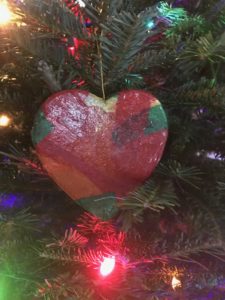 beautiful collage art, and I hold her in my heart always.

I’m celebrating some new things in my life, including fun musical happenings. I’ve joined in making a CD of songs written by Gordon MacFarland (who’s also my musical partner). Perhaps this calls for a CD ornament! A good use for all those useless old CDs. The recording process is about half done – the results are promising!

I also joined a chorus this fall, Sharing a New Song. After a few years off from choral singing, I totally enjoyed being in a chorus again. Sharing a New Song has a mission to travel and visit choruses in other countries, and to host choruses from those countries. Over the years, SANS members have traveled to Russia, Vietnam, China, Cuba and many other places. One of their closest relationships is with choruses in South Africa. It was a highlight of my year to host two lovely South African singers this fall, from the Imilonji KaNtu chorus of

Soweto. The chorus’s November performance at our local town hall was packed!

This June, SANS will travel to Argentina and Uruguay. I have never visited South America, even though one of my longtime best friends, Kelly McBride, lives there. My tree has a special ornament in honor of my coming visit to Argentina, a llama Kelly gave me many years ago.

I also have several ornaments from countries in Central America, bringing to mind the humanitarian crisis at the US border, and across countries such as El Salvador and Honduras, where crime, gangs, drugs and poverty make it nearly impossible for people simply to live a normal life. This ornament expresses my longing for a moral compass in

My daughter Molly has offered to donate to the charities of our choice this year as her gift to us. I chose a donation to RAICES, which provides legal assistance to those stuck in immigration limbo at the Texas border. May 2019 bring some resolution to this terrible crisis and relief to the many people around the world who suffer due to poverty and war.