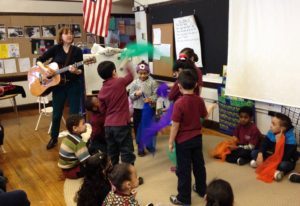 Children act out a story in the classroom.

“When children dramatize, move to, or create music to represent a story, they become actively involved in working with the ideas in the story … As they translate the words to art forms, each story comes to life.  Indeed, the act of transforming or translating is fundamental to attaining understanding or comprehension.”

– Meryl Goldberg, Integrating the arts: An approach to teaching and learning in multicultural and multilingual settings, Pearson, 2006.

Music is such an awesome vehicle for teaching children about sequence & narrative that it becomes a natural way to explore the elements of fictional stories. One of my classrooms did an extensive unit on castles and fairy stories, to which I was able to bring several songs, including a song I’d written with a previous class, “If I Lived in a Castle.” The castle song doesn’t tell a story, but it’s about the characters that live in a castle, giving the teacher the chance to introduce the concept of characters and ask children to think of additional characters who might inhabit a castle. (This song is on my CD, Make It a Song, Song, Song.)

The class also enjoyed acting out a traditional song based on the “Sleeping Beauty” story, entitled “Thorn Rosa.” I learned this song from Amy Conley, a fellow member of The Children’s Music Network. She had made various changes to include more characters and thus more children. The “Thorn Rosa” activity – which we dubbed “Royal Children” so that male children could be included, too – incorporates music, drama and movement.  I usually hand out colored scarves appropriate to the characters in the story. By acting out this song, the children learn about characters and narrative structure.  They also portray the story’s themes of good versus evil – dramatizing the evil witches or wizards who cast the spell, fire-breathing dragons who threaten the castle, knights who combat the dragons, and magical unicorns who wake the children at the end of their long sleep. (This song is on my CD, Once Upon a Tune.)

Another way I use music to enhance story knowledge is with a song I wrote with a PreK class at Boston’s Gardner Pilot Academy. The students were in the midst of a unit on fairy tales and their favorite story was the Three Little Pigs. Adding music enhanced their learning in several ways. First, it engaged the students in learning about music itself, specifically about opera and the blues. The students helped select two song styles for the mini-opera: one was a folk-styled little pig theme and the other a rock/blues big bad wolf theme. Both themes were repeated several times – as they are in the story – so the children soon felt very comfortable singing the simple lyrics.

A second learning outcome of the “Three Piggy Opera” idea was the opportunity  to deepen the children’s story knowledge through drama.  The benefits of drama included a new level of understanding of the characters  (students put on their best bad-wolf snarl) and a great lesson in classroom cooperation as the children chose roles, worked in partners and groups, and waited their turns.  Similar to the “Thorn Rosa” activity, our piggy opera provided multiple learning outcomes:  musical knowledge, social/emotional learning, and a new perspective on the story itself. (This song is on my CD, Singing All the Way Home.)

Teachers can undertake these kinds of story/music projects with the help of a music specialist, but most would be relatively easy for classroom teachers to do by themselves.  The Royal Children song is simple to sing and can be done without any instrumental accompaniment, and teachers could always use my CD for the Three Pigs activity. Here is a link to a video in which you can see some kids acting out The Three Piggy Opera: https://www.youtube.com/watch?v=5yUs7qJanOE  This can quickly become a favorite activity that kids will stage spontaneously – no teacher required!

This blog post is a “reprint” of an earlier entry. Stay tuned for a new post coming soon!