Home Reflections Memo to Next Governor: Get Pre-K Right!

Memo to Next Governor: Get Pre-K Right! 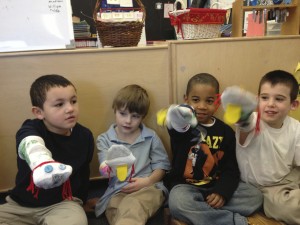 Children play with handmade sock puppets in a Boston classroom.

As our next governor, you could make Massachusetts a leader in early education, as we already are in other aspects of education.

The problem is, it’s not going to be simple, or cheap. That might be why you’ve backed off giving universal Pre-K full support. This is a mistake. The young children of our state need you as their advocate.

For almost 20 years, I’ve worked in early childhood education. As a children’s musician and literacy specialist, I work in dozens of classrooms from Dorchester to Winchester, for kids ranging in age from toddlers through first grade. I work with some of the state’s most affluent children, as well as children in the homeless system.

In kindergarten classrooms, I’ve witnessed big differences between children who have been in preschool and those who haven’t. We expect a lot of kindergarteners these days, and those who come in without any formal Pre-K experience are at a big disadvantage. Some kids make up the ground; for many others, it’s far harder.

Children from low-income families are especially vulnerable. A report by the Annie E. Casey Foundation showed that 82 percent of low-income children in fourth grade in 2011 failed to reach the proficient level on national assessments.

Studies cited in the Casey report show that preschool is one of the most important factors in school readiness and achievement in elementary school. Yet I heard Republican candidate Charlie Baker dispute the validity of these findings. I can only respond, really? It’s just common sense that children who are well prepared for kindergarten are more likely to succeed, there and beyond.

Baker said he’d rather make it a priority to strengthen K-12 education. But it shouldn’t be a question of either-or. We need both.

Even so, Baker finally landed in pretty much the same place as Democrat Martha Coakley on Pre-K. For the time being, both major candidates favor getting low-income children off the wait list for Pre-K programs. Not enough, but a start.

Here’s the thing. Assuming we do take that first step and expand Pre-K programs to include all low-income children, we’d better be sure we do it the right way. And be willing to provide the funding it takes to do so.

Most important, get the curriculum right. A recent opinion piece in The New York Times, written as that city embarks on universal Pre-K, discussed how critical play is for early learning.

Should be a no-brainer: let little kids spend their time playing. It’s how they learn. Unfortunately, today’s kindergarten classrooms haven’t set a good precedent. It’s really not a joke that kindergarten is the new first grade.

The K-classrooms I visit still have blocks and painting easels and the toy kitchens, but how often do kids get to use them? The best teachers find ways to incorporate play into lessons in math and reading. But there are also those dry worksheets, and kids forced to connect the dots in awkward attempts to write their letters and numbers. There’s too much sitting still for many little ones.

It wouldn’t be hard for this new kindergarten norm to start trickling down. We already ask five-year-olds to do things many aren’t ready to handle. Will age four be any different?

So here’s what I’d like to see those Pre-K classrooms doing. I’d like to see them follow the Reggio Emilia philosophy in which children are empowered to take the lead in the learning process. I’d love to see all children immersed in the kind of experiential learning that educator Bev Bos has modeled in her northern California Rosewood Preschool.

In these programs, young children have the freedom to follow their own interests, to learn in ways that are appropriate to where they are, developmentally, and what they most love to do. These programs are play-centered and child-centered. They’re filled with opportunities to make art, explore nature, play instruments, look at books, play games of imagination and make friends.

Of course there need to be curriculum guidelines, but they’d better be open-ended enough to allow all of the above.

Massachusetts needs to show it values its youngest children enough to offer high-quality Pre-K to all. Our classrooms could also be models to the country for how to do it right.