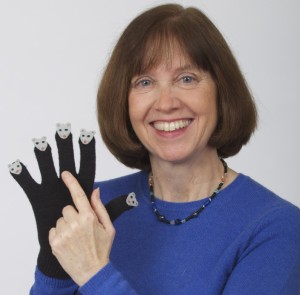 The mouse glove is great for telling the story of Frederick.

I had a chance to present my first music and literacy workshop for children’s librarians yesterday and it was a lot of fun! One thing we discussed was pairing books with songs.

I love including books and references to books in my music & literacy sessions with young children. I’ve received lots of suggested book/song pairings from fellow members of The Children’s Music Network.

In my post earlier this week, I talked about pairing the “Today is Monday” song with Eric Carle’s book by the same name. Another book that I love to enhance with songs is Leo Lionni’s book, Frederick.

In this story, all the mice are gathering food and nesting for the winter while mouse Frederick stares dreamily across the field. Frederick tells the others that he is gathering colors, sunlight and words, which he will share with the other mice to help them get through the long winter.

I usually tell the story in my own words, using my “mouse” glove, giving out props to the children in advance. The song pairings could also be used while reading the book.

The first song I sing is my own version of “Three Blind Mice,” which I’d never normally sing anyway (such brutal treatment of three mice with a disability!). My lyrics go:

They’re gathering up some wheat and corn

For something to eat during winter storms

And also some straw to keep them warm

I have the children run their fingers across their palm or the floor to show scurrying mice.

Later in the story, when Frederick shares his gathered sunbeams with the children, I sing and do the motions to the traditional song, “Mr. Golden Sun.” I also give out yellow ribbons to the children to wave in the air as sunbeams.

When Frederick shares the colors with the other mice, I sing Ruth Pelham’s “Rainbow Around Me” and have the children wave colored scarves. To save time and stay on track with telling the story, I often just do the chorus of the song rather than all the different color verses.

Finally, Frederick shares the words he’s gathered by giving all the mice a poem about the four seasons. I write out words from the poem and give each child a word. Since most of the children are pre-readers, I read the word with them, and then we point to the words as they come up when I read the poem.

This is a delightful book and song to share in late November or early December! When I first read the book, I was inspired to write my own song about getting ready for winter. I don’t currently have a recording, but I’ll share it sometime soon.