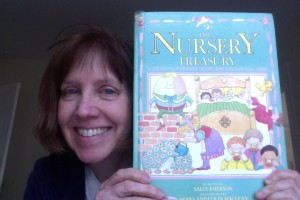 As September draws closer, early education teachers everywhere are gathering their strategies to meet academic goals for our youngest kids. To prepare children for reading, traditional nursery rhymes remain a terrific tool. Sure, there are some you wouldn’t want to recite in today’s world, but many nursery songs and chants remain as useful as ever.

I’ve expanded some nursery songs and chants to make them even more helpful for learning letter sounds. One of my favorites is the “The Muffin Man,” a favorite of many young children and super easy for kids to sing. My verse variations feature the Donut Dog, 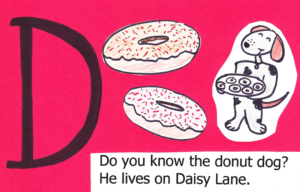 Cookie Cat and others. This song is on my album, Songs for Rhyming and Reading. This album is available for download exclusively from one of my favorite websites, Songs for Teaching. You can find “The Muffin Man” here.

I also never tire of singing my version of “Two Little Blackbirds,” which I’ve changed to “Two Little Robins.” You can find a video of my presentation of this song here.  In an earlier blog post, I discussed ways to expand upon this song in the classroom.

The basic song, which you can find on my album Once Upon a Tune, goes like this:

For learning different starting consonants, I recommend adding even more creatures to the song. Here are some of the verses I’ve used over the years, mainly with birds and fish, but you could easily add other animals. 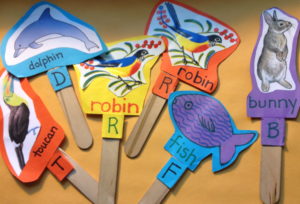 Have fun making up verses and teaching this simple song to children!

Two little penguins out in the snow,

One named Peg and one named Poe.

Waddle off … (or swim away)

Two little hummingbirds down in the valley

One named Hettie and one named Halley

One named Will and one named White

One named Cam and one named Cole

One named Meg, one named Ming.

Mock away Meg … (Have mockingbirds mock other people’s songs)

One named Ted and one named Till

Two little jellyfish, swimming down below

One named Jane and one named Joe

One named Deb and one named Dave

One named Wes and one named Will